In this review we will take a look at the best touchless kitchen waste bins that are currently available and we will also outline the benefits of these bins so that you can choose the one that you desire. 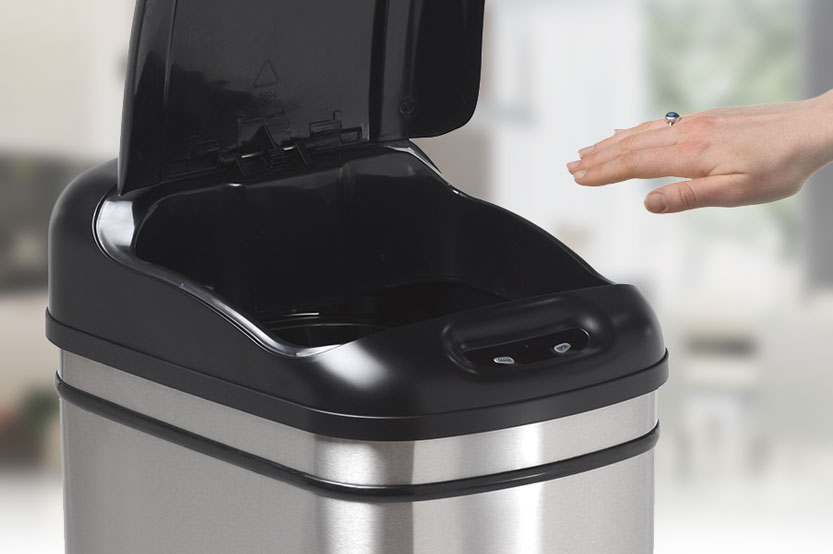 Bins are incredibly important in the modern day and age and they can be effective at dispensing of rubbish. However, bins can also be unhygienic and it can therefore be important to choose a bin that has a functional way of avoiding the spread of germs.

In this review we will take a look at the best touchless kitchen waste bins that are currently available and we will also outline the benefits of these bins so that you can choose the one that you desire.

1. Cross-Contamination Prevention
As soon as you touch the bin there is a high chance of spreading germs or picking up germs. If you are carrying something across to the bin you need to touch it to lift the lid, the lid maybe covered in bacteria and horrible germs so each time you should wash your hands with soap. With a touch free bin there is no need as you don’t actually touch the bin, this means you bin stays cleaner and safer for your family.

2. The Lid Closes for you
Some kitchen bins work by foot pedal, however most are just lift up flap lids. With this, some people may forget to close the lid, or maybe about to go to the bin again so they leave it up, however with it left up awful smells can creep out, keeping the bin lid is closed while not in use also keeps the germs and odours inside the bin where they belong! A touch free bin automatically closes as well as opens, so you don’t need to worry about who left the bin lid open.

3. An Automatic waste bin requires Less Cleaning
A touch free bin means that there is less bacteria and germs around the lid, and there are also no finger prints as there is no need to touch it. If you want a stylish stainless steel bin then an automatic version is the way to go and becoming increasingly popular.

If you would like more information concerning the bins that are on offer in this set of reviews, simply click through and you will be able to get more information about these bins on the Amazon website. 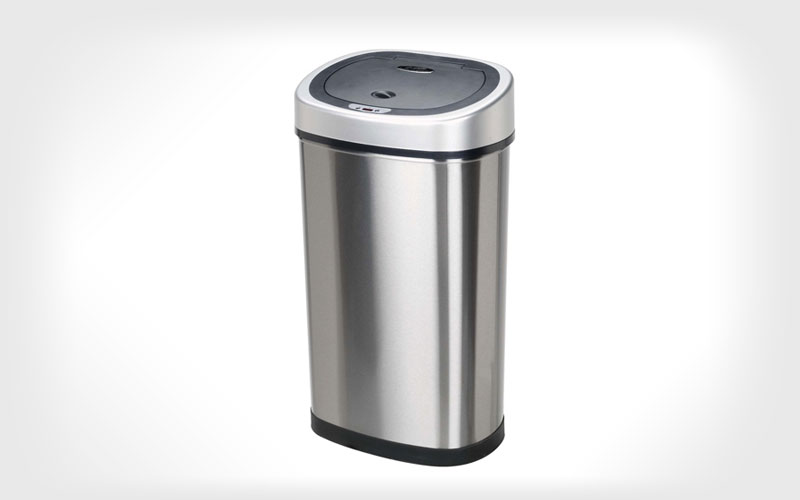 The Nine Stars DZT-50-9 Infrared Touch less Stainless Steel Trash Can has the ability to seal any odors and will eliminate any cross contamination that takes places with germs. It does this by allowing an operation that is touch free and will hold a huge 13.2 Gallons. The bin it’s also made from stainless steel of a very high quality and this will stop any dirty fingerprints from getting on the bin. The bin is great for the bedroom and the living room in the modern house and can also be used effectively in an office environment, as well as in the kitchen. The bin also has technology that allows for energy saving and this will keep the battery life longer for up to 20%. The bin also features a ring for the garbage bag and this will keep it hidden from view.

With over 2,000 reviews and a 4 star rating on Amazon it is hard to ignore this touch less bin. 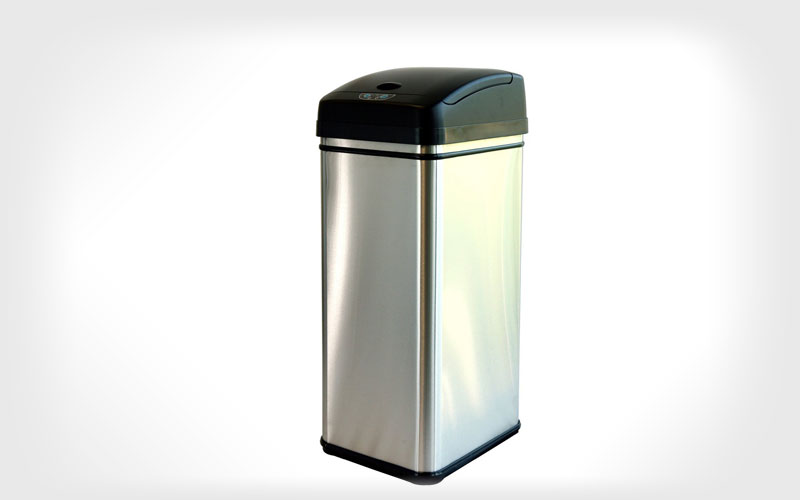 Another popular choice is the iTouchless Deodorizer Touch-Free Sensor 13-Gallon Automatic Stainless-Steel Trash Can, with over 3,000 reviews and a 4 star rating on Amazon too it is another very popular choice.

This bin comes with a carbon deodorizer and this is a refill that is sold separately. The bin has an opening that is extra wide and this will allow for larger amounts of debris. The bin also is equipped with holes that allow air to escape and this will increase the ease when removing the trash bags. The bin is powered by four batteries and also has an AC power adapter that is optional. The bin is designed with hygienic features so you do not need to touch it. You can therefore use it effectively in locations such as elderly homes.

This set of bins contains two trash cans that have a touch less functionality and will see away odors in the bin when it is used. It is also designed to eliminate any cross contamination that can take place. The bin also has a design of stainless steel on the sides and this will allow for any fingerprints to be avoided. The bin has also been designed with plastic tops in a stylish black design. There is a water resistant motion sensor that is infrared and this sits on the top of the bin so that it can be activated when you want to throw stuff away. The bin also runs on four batteries and the larger one can run on three or four batteries. The bin has been designed with technology that is energy saving. 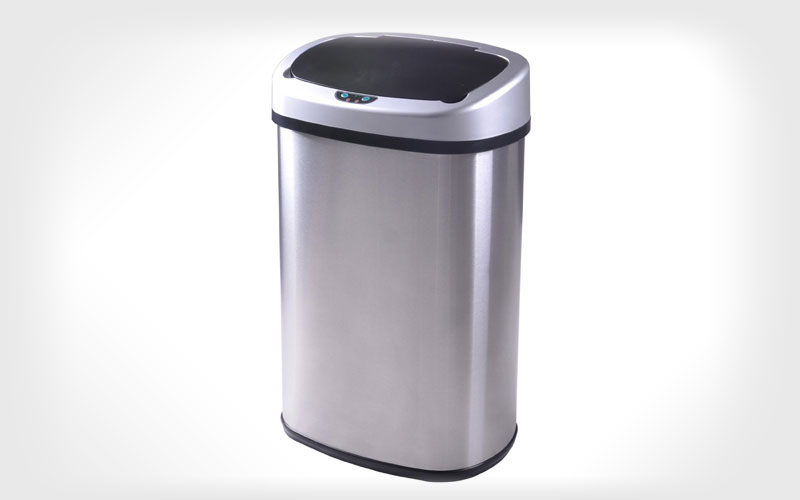 This bin is made from high-quality stainless steel that will avoid any smudges or fingerprints when it is used. The bin is also relatively large and can hold up to 13 gallons of waste. The bin has been designed with a button that will switch it on and off, and also has an open and close button for when you want the bin to be open whilst you’re throwing trash away. This bin has been designed for many different locations, and this includes the kitchen as well as the office and rooms around the home, such as the bedroom and the living room areas. 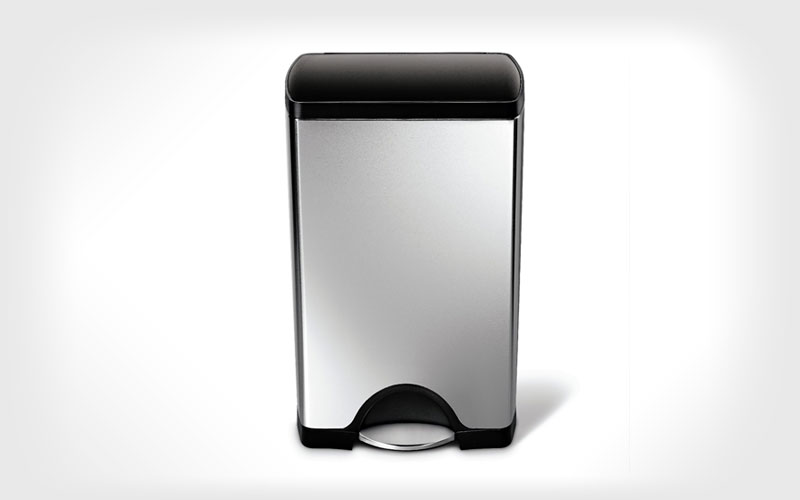 This sleek and stylish pedal bin offers a strong steel exterior. The bin also has technology and this will allow for a silent and Smooth closing operation. There is also a lid on the bin which offers a plastic damp proof design and there are hinges which are built internally into the bin that will allow for the ability to place the bin against a wall space. This bin will come with a warranty that lasts for up to 5 years and is available for custom fit lining and this will allow for the ability of a perfectly fitted bin liner when it is placed into the bin.

Not only does this high-tech gadget presents you with an easier and smarter option to throw your trash but the design of the product is also aesthetically pleasing so it will definitely make your kitchen stand out. The hardware is pretty big, eye-catching and squared off. The brush steel sensor can easily stand over about 25-inches high, and once the lid is opened it extends to over 35 inches.

The best part about simplehuman Sensor Can is its robustness, which makes it a durable product thus contributing to improved user experience. Simplehuman is made up of a die-cast steel hinge which has been integrated into the can’s body. This means that you can easily push up the sensor can against the wall, yet would not have any problems while fully opening it up. 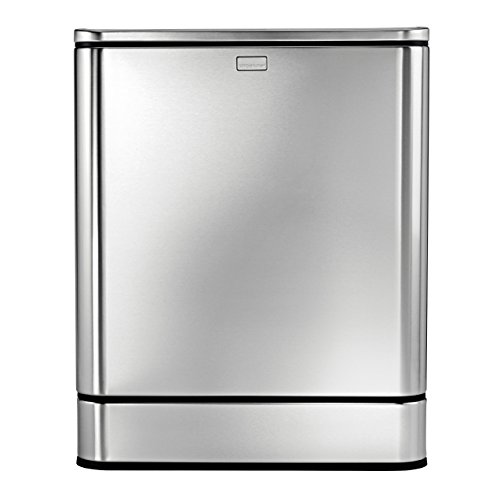 Our Rating
Buy on Amazon

When it comes to the functionality and usage of this product I would say that it is indeed exceptional. Firstly, you don’t have to mess with any foot pedal as the lid is motorised and runs on six C-size batteries and is triggered by a proximity sensor on the front edge. The battery size means that it will stay good for a year at least, and alternatively you also have an AC adapter to charge the sensor can, in case it runs out on its battery.

I would say that the sensor is also pretty diligent as it becomes picky when it comes to responsiveness, so as to avoid any accidental openings. But the only back drop is that once the lid is opened the simplehuman Sensor Can takes its time to close, assuming that you have to throw away the stuff.

If you keep on moving for more than three seconds then the lid will remain opened on the assumption that you are likely to do some more chores. This means that you have to wait for the sensor to close down automatically or have to push the lid down.

While talking about the performance and design I would like to highlight that like other high-tech trash cans simplehuman Trash Can also has a tough plastic inner-bucket together with a bag tuck section so that you can easily tidy away any excess plastic from the liner. And yes this trashcan also has an odour absorber that is integrated into the lid. These charcoal filters can swiftly deal with any smelly food or foul smelling diapers thus making it an effective product.

All in all I would say that the price of simplehuman Trash Can is slightly over the top almost 200 dollars that is way too expensive for a trash can. But you would likely find other luxurious non-motorised trash cans to be of similarly high prices. Therefore, it is recommended to buy this product for ease as well as to make a delightful addition to your home.

Copyright 2023 Kitchengadgetbox.com | All images and logos are the copyright and/or trademark of the respective owners.

Kitchengadgetbox.com is a participant in the Amazon Services LLC Associates Program, an affiliate advertising program designed to provide a means for sites to earn advertising fees by advertising and linking to Amazon.com.